The intervention of Andrei Nacu within the Mihai Oroveanu Image Collection entails the inclusion of new photographs in the archive, without specifying which they are. Nacu thereby extrapolates his own experience as a collector of photographs, as an artist who in his practice employs archive materials, and, not least, as a collaborator of the Royal Anthropological Institute, London, an institution that houses a vast collection of images. His action gives rise to multiple questions and creates the premises for debates on the politics of the image, revealing the complex and at the same time problematic character of the relationship between image and property. The construction of narratives proceeding from the archive constructed by Mihai Oroveanu is at an incipient stage, and the political charge of the situation should not be ignored. Its potential, which also entails a great responsibility for the research team, is all the more obvious given that the archive itself is in the midst of a process of formatting, in a context defined by the culture and circulation of the image.

This invisible intervention – opaque even to the project team – is completed by a diagram inserted into the exhibition space, whose aim is to bring into discussion a series of questions that extend the task of researching the images, siting it in a (self-)interrogative zone: Who took the photographs? When? In what context? What was their purpose? What journey have they made? Who owns the photographs now? Who uses them? To what end? What part does the viewer/user play and how is she interpellated by such questions? Can the archive be a public space? By the fact that they are visible to visitors and users, such questions are intended to stimulate ongoing debate about the role of the image, bringing critical reflection to the space of the archive. 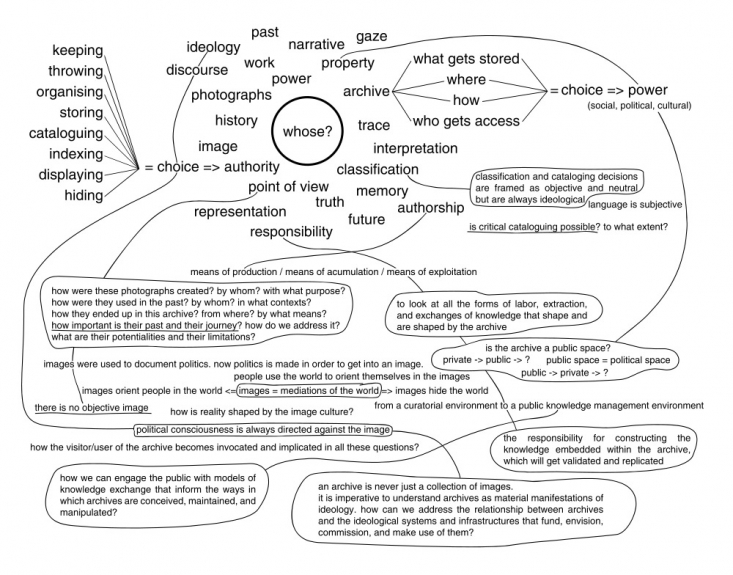